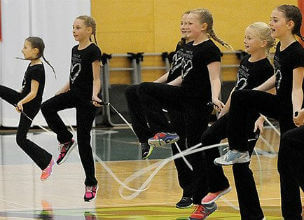 As the simple act of jumping rope became so much more than a child’s game, many organizations, federations, and associations started to appear worldwide. Every single one of them had plans for their own events, and most of them did, while others collaborated with each other to form even larger and more popular venues. Today, we will take a look at some of the leading rope skipping championships – let’s get it on!

The most well-known jump rope event known today, is the World Jump Rope Championship. Some of the most famous countries that have participated (and still do to these days) are Austria, Belgium, Denmark, Estonia, Finland, Germany, Hungary, Portugal, Russia, Slovakia, Sweden, Switzerland, United Kingdom, China, Japan, South Korea, Canada, USA, Australia, South Africa, and a few others.

Depending on the rules of membership for the current International Jump Rope Union, a country can occupy one of two types of memberships. The first one is called “provisional” and is it usually given to countries that wish to participate in a particular event, without a continuous contribution to the organization. A full membership not only gives a country the chance to participate in global championships, but also provides the member with several responsibilities that are meant to promote and preserve the sport.

With the last year championship held in Orlando, Florida, USA, the upcoming 2018 event will also be held in the same country and state, albeit in a different location. Some of the international championships have been held in Sweden, Africa, and other countries; however, since there is no official information on how the event locations are chosen, the only things we can speculate is that it is going to be someone with a full membership within the organization.

Some world-wide competitions are held on a school level as well. This brings us to the next point – since it’s an organization focused on school presence, the qualification standards of the organization responsible for the event, states that everyone is free to participate, as long as they have the proper age, and represent a school. There are no national qualification standards; however, participants must cover one of the two age divisions set by the organization. Only skippers of 11 and 14 of age are qualified for participation.

One very popular event is called the International Rope Skipping Organization. It definitely stands out from all the others, as it focuses on a very particular skipping style, that involves the heavy use of gymnastic and athletic techniques. In this competition you can see some extreme moves such as areal flips, spins, and body twists which are quite difficult and dangerous to perform; nevertheless, this type of rope jumping is also known to be outstandingly interesting to watch.

A Chance for New Events

Although not too few, the championships and events organized by associations worldwide do not seem to be too great in number as to fully grasp the ingenuity of the sport. There are a lot of new techniques being invented by aspiring pioneers, which are easily assimilated and perfected by new skippers very fast. While in other sports, perfecting a particular move can take up to decades, rope skippers can do it in a year or less. This brings out the need for new types of events that will include those more complex techniques as disciplines.

Bear in mind that does not remove the need for the classical form of the sport; after all, complexity comes from simplicity and both should be present in their respected fields. The jump rope community is large and friendly, and any organized event (whether on a local or an international level) is always known to deliver an incredible entertainment factor. Don’t believe me? Find out for yourself!